For anyone who missed out today,  we had another great pi jam,  Big thank you to those that turned up and the 4 young people who also made it.

Again today was a good mix,  Tom demonstrated his latest project: a face with a built in  webcam that can track a coloured ball using OpenCV!  This uses both Raspberry Pi and Arduino. 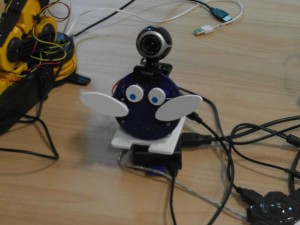 One of the young people showed me the fg and bg commands, so my pi-liter project can now run but be put in the background,  while it runs.  I showed him the cowsay command, and one of the other young people got cmatrix working.  These young people are uber L337.

I attempted to install Skype from Ubuntu software centre,  failed,  tried to download and then tell the installer to run through software centre,  that failed,  so just used dpkg and it worked fine without problems! I put a few notes on my website about this.

We could now do with more monitors and Pis, so we can get more people set up with Pis.  I think we may have a few laptops at a future jam.