Another successful pi jam,   Tom set up his latest project, on the pi, which uses a wii remote to control a helicopter flying over open street maps,  this works very well and you can move around the map area,  which was set for the locality of the Pi jam. 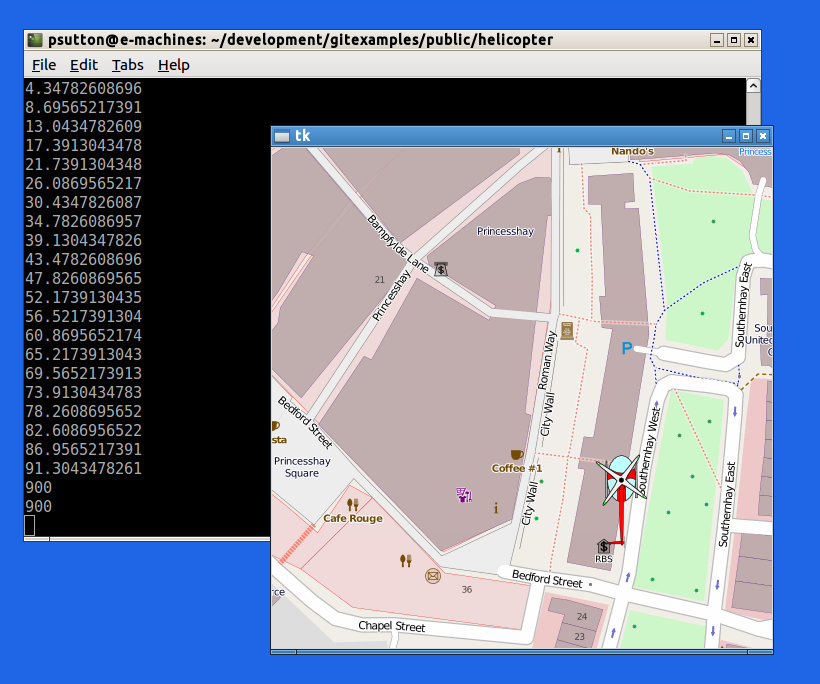 With a video too

Note: The above video was made on my desktop.  Using record my desktop.

Another area was helping a new user set up a pi,  I advised a visitor on where to get a pi kit so they can get set up and started with programming.  So we got one pi fully working and another pi user leaving with a good idea of what he needs.   Hopefully next time we can start some programming or similar.

Another user brought his pi, and robot kit,  after some work, and suggesting changing the pi so it had its own static ip address, this was then done successfully By ediing the pi configuration by putting the sd card in to the pi,  and editing from there, then putting back in the pi and booting with the altered configuration.  The pi was then attached to a breadboard with several LEDs,  and transistors so that the pi could control the LEDs via the GPIO port.

Tom also brought along his robot arm and robot.

Another good afternoon.   We now need to get some hdmi to dvi cables so that we can set up more pis.

The pi jams are getting better,  hopefully we will start seeing the same people and new people each time. and build up a nice group of users, like there is in Exeter.  Which on that the next Exeter Jam is on the 22nd so if you missed the 15th you can always come up to Exeter on the 22nd between 10 and 12 and see more projects etc.